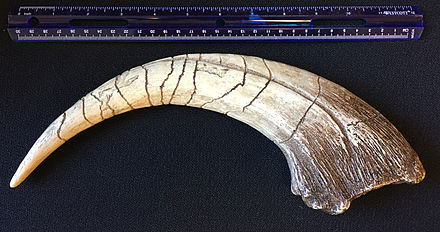 Megaraptor ("giant thief") is a genus of large theropod dinosaur that lived in the Turonian to Coniacian ages of the Late Cretaceous. Its fossils have been discovered in the Patagonian region of Argentina. Initially thought to have been a giant dromaeosaur-like coelurosaur, it was classified as a neovenatorid allosauroid in previous phylogenies, but a more recent phylogeny has placed it as a basal tyrannosauroid coelurosaur. The discovery and phylogeny of Gualicho suggests that Megaraptor is either an allosauroid or basal coelurosaur.