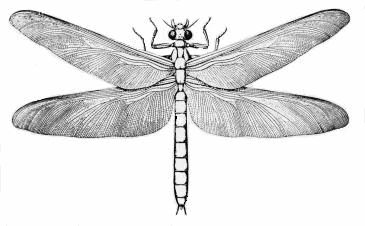 Meganeura is a genus of extinct insects from the Carboniferous period (approximately 300 million years ago), which resembled and are related to the present-day dragonflies. With wingspans ranging from 65 cm (25.6 in) to over 70 cm (27.6 in), M. monyi is one of the largest known flying insect species; the Permian Meganeuropsis permiana is another. Meganeura were predatory, and fed on other insects.

Fossils were discovered in the French Stephanian Coal Measures of Commentry in 1880. In 1885, French paleontologist Charles Brongniart described and named the fossil "Meganeura" (large-nerved), which refers to the network of veins on the insect's wings. Another fine fossil specimen was found in 1979 at Bolsover in Derbyshire. The holotype is housed in the Museum national d'histoire naturelle, Paris.