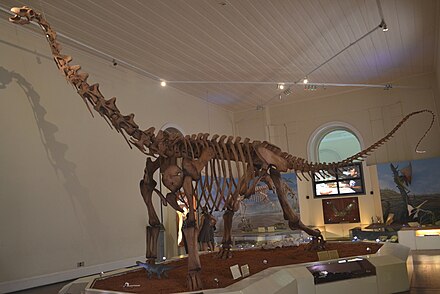 Maxakalisaurus is a genus of aeolosaurid dinosaur, found in Brazil, 45 kilometers (28 miles) from the city of Prata, in the state of Minas Gerais in 1998. It was related to Saltasaurus, a sauropod considered unusual because it had evolved apparently defensive traits, including bony plates on its skin and vertical plates along its spine; such osteoderms have also been found for Maxakalisaurus. The genus name is derived from the tribe of the Maxakali; Topa is one of their divinities.

The type specimen of Maxakalisaurus belonged to an animal about 13 meters (43 feet) long, with an estimated weight of 9 tons, although, according to paleontologist Alexander Kellner, it could have reached a length of approximately 20 meters (66 feet). It had a long neck and tail, ridged teeth (unusual among sauropods) and lived about 80 million years ago. Because sauropods seem to have lacked significant competition in South America, they evolved there with greater diversity and more unusual traits than elsewhere in the world.

In 2016, a new specimen comprising a dentary and teeth was described as belonging to Maxakalisaurus. The phylogenetic analysis recovered Maxakalisaurus as an aeolosaurine along with Aeolosaurus and Gondwanatitan.