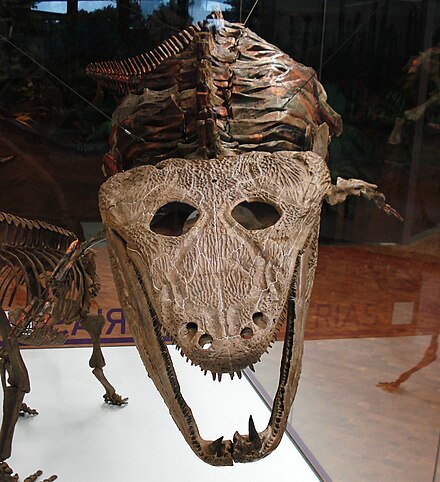 Mastodonsaurus (meaning "breast tooth lizard") is an extinct genus of temnospondyl amphibian from the Middle Triassic. It belongs to a Triassic group of temnospondyls called Capitosauria, characterized by their large body size and presumably aquatic lifestyles. Like those of many other capitosaurs, the head of Mastodonsaurus was triangular, reaching about 1.25 metres (4.1 ft) in the largest specimens. The total length of the largest individuals is about 4 to 6 metres (13 to 20 ft). The large, oval eye sockets are midway along the skull. The jaws are lined with conical teeth. Two large tusks project up from the end of the lower jaw, fitting through openings on the palate and emerging out from the top of the skull when the jaw is closed. The body of Mastodonsaurus is relatively small in proportion to the large head, and the tail is relatively short. The greatly reduced limb bones have joints that are poorly developed. The marked reduction of the limbs and grooves on the head called sensory sulci show that Mastodonsaurus was an aquatic animal that rarely left water. Mastodonsaurus may have been completely unable to leave the water, as large quantities of bones have been found that suggest individuals died en masse when pools dried up during times of drought. It inhabited swampy pools and lived mainly on fish, whose remains have been found in its fossilized coprolites. It probably also ate land-living animals, such as small archosaurs. The fossils of some smaller temnospondyls bear tooth marks made by Mastodonsaurus-like animals.

Mastodonsaurus was once thought to be responsible for the footprints found in Triassic sandstones and described as Chirotherium, but more recent research had found that the tracks belong to crocodile-like pseudosuchian reptiles.