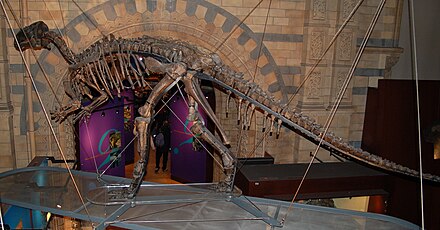 Mantellisaurus is a genus of dinosaur formerly known as Iguanodon atherfieldensis that lived in the Barremian and possibly the early Aptian ages of the Early Cretaceous Period of Europe. Its remains are known from Belgium (Bernissart), England and possibly Germany. The new genus was erected by Gregory Paul in 2007. According to Paul, it is more lightly built than Iguanodon and more closely related to Ouranosaurus, making Iguanodon in its traditional sense paraphyletic. It is known from many complete and almost complete skeletons. The genus name honours Gideon Mantell, the discoverer of Iguanodon. Mantellisaurus lived during the Early Cretaceous in what is now England.