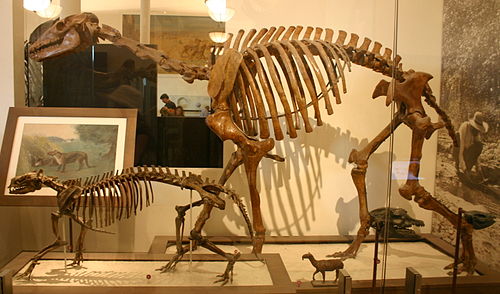 Macrauchenia (name meaning "long llama", based on the now superseded Latin term for llamas, Auchenia, from Greek terms which literally means "big neck") was a long-necked and long-limbed, three-toed South American ungulate, typifying the order Litopterna. The oldest fossils date to around seven million years ago, and M. patachonica disappears from the fossil record during the late Pleistocene, around 20,000-10,000 years ago. M. patachonica was the best known member of the family Macraucheniidae, and is known only from fossil finds in South America, primarily from the Lujan Formation in Argentina. The type specimen was discovered by Charles Darwin during the voyage of the Beagle. In life, Macrauchenia resembled a humpless camel with a short trunk, though it is not closely related to either camels or proboscideans.