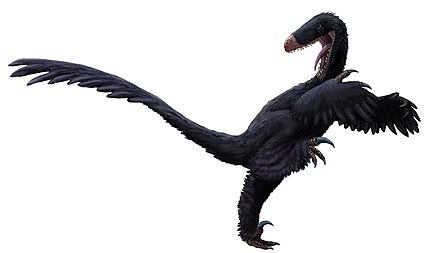 Luanchuanraptor (meaning "Luanchuan thief") is a genus of dromaeosaurid theropod dinosaur from the Late Cretaceous of China. It is based on a partial skeleton from the Qiupa Formation in Luanchuan, Henan. A medium-sized dromaeosaurid, it is the first Asian dromaeosaurid described from outside the Gobi Desert or northeastern China. The fossil material is cataloged as 4HIII-0100 in the Henan Geological Museum and includes four teeth, one frontal, a neck vertebra, one or two back vertebrae, seventeen tail vertebrae, ribs, chevrons, a humerus (upper arm bone), claw and finger bones, partial shoulder and pelvic girdles, and other fragmentary bones from a moderately sized dromaeosaurid. The type species is L. henanensis, described by Lu et al. in 2007.