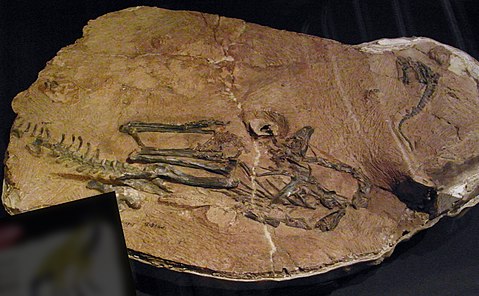 Limusaurus (meaning "mud lizard") is a genus of theropod dinosaur from the Jurassic (Oxfordian stage) Upper Shishugou Formation in the Junggar Basin of western China. The genus contains a single species, L. inextricabilis. Limusaurus was a small, slender animal, about 1.7 metres (5 ft 7 in) in length, that had a long neck and legs but also highly reduced forelimbs. It underwent a drastic morphological transformation as it aged; while juveniles were toothed, these teeth were completely lost and replaced by a beak with age, corresponding to a shift in diet from omnivory to herbivory.

Limusaurus is the first definitively known ceratosaur from Eastern Asia; while originally considered to be the most basal members (i.e. phylogenetically closest to the origin) of the group Ceratosauria along with its closest relative, Elaphrosaurus, a 2016 analysis showed that they are in fact members of the Noasauridae, a group of similarly small and lightly-built abelisaurs. The pattern of digit reduction in Limusaurus has been used to support the contested hypothesis that the three-fingered hand of tetanuran theropods is the result of the loss of the first and fifth digits from the ancestral five-fingered theropod hand, which has implications for the evolution of birds. However, it is now considered to be irrelevant to the subject of digit homology.