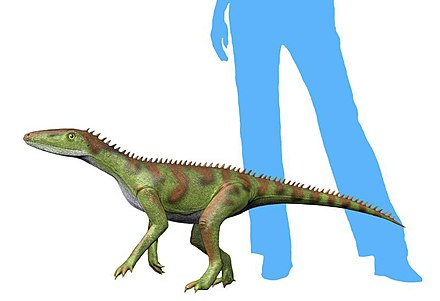 Lewisuchus is a genus of archosaur that lived during the Middle Triassic (Ladinian); it was a silesaurid dinosauriform, a member of the group of reptiles which led to the dinosaurs. Lewisuchus was about one meter long. Fossils have been found in Argentina. Some of the fossils originally assigned to Lewisuchus have since been moved to other genera, and the remaining portions closely resemble those of Pseudolagosuchus. A 2010 study in the Journal Nature indicated that the two may be synonymous. They were approximately the same size and came from the same locality and strata, but the fossil material is fragmentary and there is very little overlapping material. If it is shown the two are synonymous (through the discovery of additional fossils) the name Lewisuchus will get priority. A large phylogenetic analysis of early dinosaurs and dinosauromorphs by Matthew Baron, David Norman and Paul Barrett (2017) and published in the journal Nature treated Lewisuchus as being synonymous with Pseudolagosuchus.