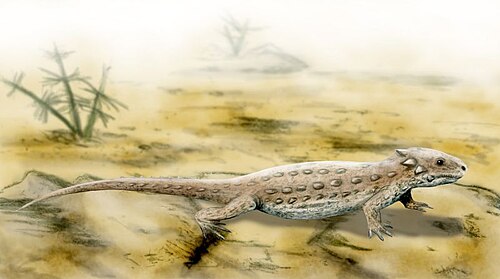 Leptopleuron is an extinct genus of procolophonid that lived in the dry lands during the late Triassic in Elgin of northern Scotland and was the first to be included in the clade of Procolophonidae. First described by English paleontologist and biologist Sir Richard Owen, Leptopleuron is derived from two Greek bases, leptos for "slender" and pleuron for "rib," describing it as having slender ribs. The fossil is also known by a second name, Telerpeton, which is derived from the Greek bases tele for "far off" and herpeton for "reptile." In Scotland, Leptopleuron was found specifically in the Lossiemouth Sandstone Formation. The yellow sandstone it was located in was poorly lithified with wind coming from the southwest. The environment is also described to consist of barchan dunes due to the winds, ranging up to 20 m tall that spread during dry phases into flood plains. Procolophonoids such as Leptopleuron were considered an essential addition to the terrestrial ecosystem during the Triassic.