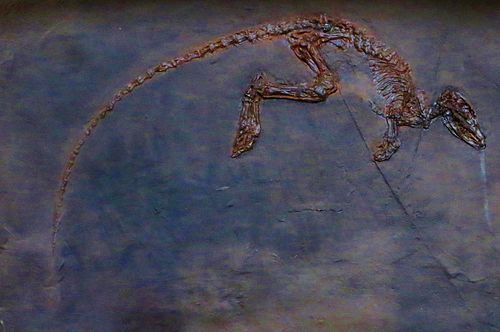 Leptictidium (meaning "graceful weasel" in Latin) is an extinct genus of small mammals; together with macropods, giant pangolins, and humans, they are the only known completely bipedal mammals. Comprising eight species, they resembled today's elephant shrews. They are especially interesting for their combination of characteristics typical of primitive eutherians with highly specialized adaptations, such as powerful hind legs and a long tail which aided in locomotion. They were omnivorous, their diet a combination of insects, lizards and small mammals. One of the first branches to split from basal eutherians, they appeared in the Lower Eocene, a time of warm temperatures and high humidity, roughly fifty million years ago. Although they were widespread throughout Europe, they became extinct around thirty-five million years ago with no descendants, probably because they were adapted to live in forest ecosystems and were unable to adapt to the open plains of the Oligocene.