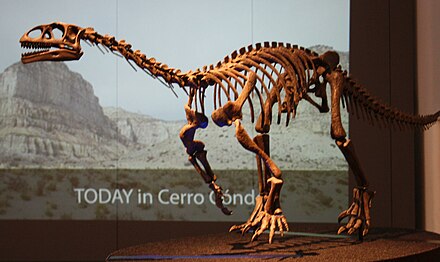 Leonerasaurus is a basal genus of sauropodomorph dinosaur. Currently, there is only one species known, named L. taquetrensis by Diego Pol, Alberto Garrido and Ignacio A. Cerda in 2011. The fossil, an incomplete subadult individual, was found in the Las Leoneras Formation in Argentina. This formation is probably Early Jurassic in age. Leonerasaurus was a small non-sauropod sauropodomorph, showing an unusual combination of basal and derived characters. This indicates that the evolution of early sauropodomorphs witnessed a great degree of convergent evolution.