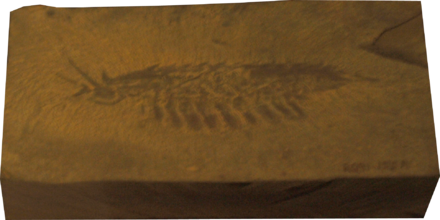 Leanchoilia is a arachnomorph arthropod known from Cambrian deposits of the Burgess Shale in Canada and the Chengjiang biota of China. It was about 5 centimetres (2.0 in) long and had long, whip-like feelers mounted on frontal arm-like appendages. Its internal organs are occasionally preserved within the substrate in three dimensions.

Two species are tentatively accepted today: the type species L. superlata and the recently revalidated L. persephone. They may however be examples of sexual dimorphism. 55 specimens of Leanchoilia are known from the Greater Phyllopod bed, where they comprise 0.1% of the community.