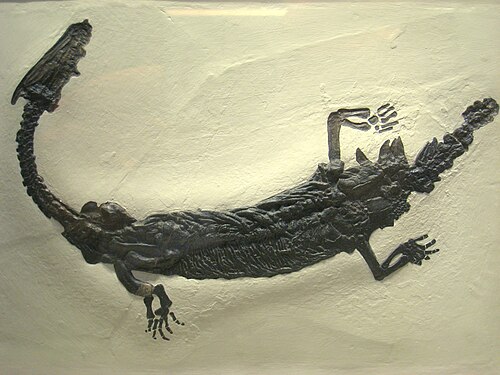 Lariosaurus is an extinct genus of nothosaurid from the Middle Triassic (late Anisian to late Ladinian stage) of central and western Europe and China. With a length of just 60 centimetres (2.0 ft), it was one of the smallest known nothosaurs. First discovered at Perledo on the Lake Como in 1830, it was named in 1847 by Curioni, its name meaning "Lizard from Larius", the ancient name of the lake.

For a nothosaur, Lariosaurus was primitive, possessing a short neck and small flippers in comparison to its relatives. This would have made it a relatively poor swimmer, and it is presumed to have spent lots of time on dry land, or hunting in shallows.

Lariosaurus was unique among nothosaurs because its front legs were adapted into paddles, while the back legs remained five-toed. Further, based on skeletal findings of immature lariosaurs inside the adults, Lariosaurus is believed by many to be viviparous, or able to bear live young. Another Lariosaurus skeleton was found with two juvenile placodonts of the Cyamodus genus in its stomach, giving an indication of its diet.