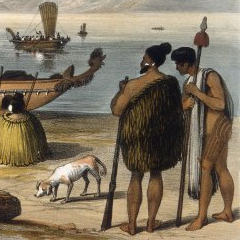 Kuri is the Maori language name for the Polynesian dog. It was introduced to New Zealand by Maori during their migrations from East Polynesia sometime around 1280 AD. It was used by Maori as a food source. In addition, they used the skins and fur to make dog-skin cloaks (Kahu kuri), belts, decorating weapons, and poi.

The kuri became extinct in New Zealand some time after the arrival of European settlers. The remains of the last known specimens, a female and her pup, are now in the collection of the Museum of New Zealand Te Papa Tongarewa.

According to Maori tradition, the demigod Maui transformed his brother-in-law Irawaru into the first dog.