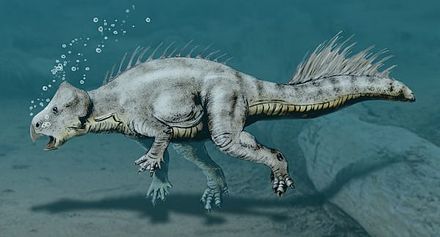 Koreaceratops is a genus of basal ceratopsian dinosaur discovered in Albian-age Lower Cretaceous rocks of South Korea. It is based on KIGAM VP 200801, an articulated series of 36 caudal vertebrae associated with partial hind limbs and ischia. This specimen was found in a sandstone block that had been incorporated into the Tando dam at Hwaseong City; the way the specimen is cut off suggests that more of it was present before quarrying. The dam was built in 1994, and the bones were first brought to the attention of paleontologists in 2008, after a public official noticed them. The specimen probably came from the lower Tando beds. The upper part of this informally named formation dates to 103 +- 0.5 million years ago. Koreaceratops was described by Yuong-Nam Lee and colleagues in 2011. The genus name is a combination of "Korea" and the Greek keras (keras) meaning 'horn' and opsis (opsis) meaning 'face'. The type species is K. hwaseongensis, named after Hwaseong City.

Koreaceratops is notable for the tall neural spines on its caudal vertebrae, and for the structure of its astragalus. In some of the distal caudal vertebrae, the neural spines are over five times the height of the vertebral centra to which they attach. Lee et al. noted that several other ceratopsians also had tall neural spines on their caudals. As this trait appears in several branches of ceratopsians, Lee et al. postulated that the feature was independently evolved, perhaps as an adaptation for swimming. Lee et al. performed a phylogenetic analysis and found Koreaceratops to be positioned between Archaeoceratops and more derived ceratopsians.