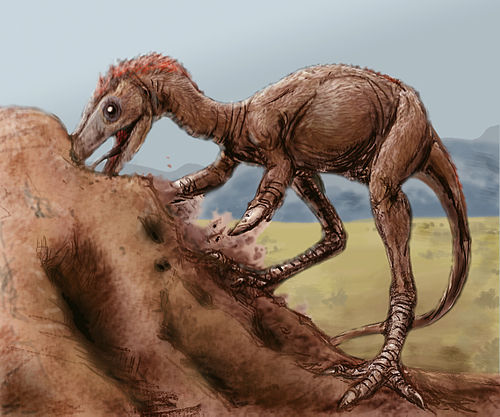 Kol is a genus of alvarezsaurid theropod dinosaur from the Late Cretaceous of Mongolia. The type specimen was excavated from the Ukhaa Tolgod locality of the Djadochta Formation, dating to about 75 million years ago. It is believed to have been about twice the size of the contemporary Shuvuuia. However, unlike Shuvuuia, which is known from many well preserved specimens, and although Ukhaa Tolgod has been thoroughly explored, Kol is known only from one complete foot, suggesting that it must have been relatively rare in that ecosystem.

Because of the incomplete nature of the type specimen (catalog number IGM 100/2011), the exact relationship of Kol to other alvarezsaurids has been difficult to determine. However, Kol shows an extreme arctometatarsalian condition of the foot bones, in which the middle metatarsal is severely pinched between the outer bones (usually considered an adaptation for fast running, also seen in ornithomimosaurs and tyrannosaurs). This suggests that it was more advanced than primitive alvarezsaurids which lacked this foot structure, like Alvarezsaurus and Patagonykus. It was probably more closely related to contemporary Mongolian species.