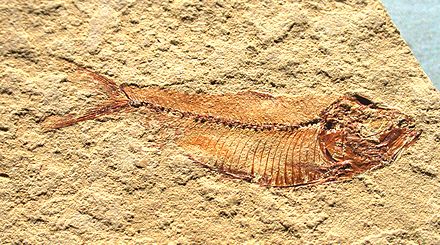 Knightia is an extinct genus of clupeid clupeiform bony fish that lived in the fresh water lakes and rivers of North America and Asia during the Eocene epoch. The genus was erected by David Starr Jordan in 1907, in honor of the late University of Wyoming professor Wilbur Clinton Knight, "an indefatigable student of the paleontology of the Rocky Mountains." It is the state fossil of Wyoming, and the most commonly excavated fossil fish in the world.

Knightia belongs to the same taxonomic family as herring and sardines, and resembled the former closely enough that both Knightia alta and Knightia eocaena were originally described as species of true herring in the genus Clupea.

As with modern-day clupeids, Knightia likely fed on algae and diatoms, as well as insects and the occasional smaller fish.