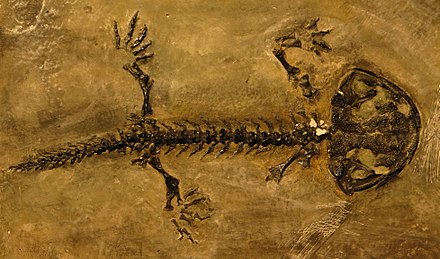 Karaurus (meaning head-tail) is an extinct genus of salamander-like amphibian from the Late Jurassic (Oxfordian - Kimmeridgian) Karabastau Svita of Kazakhstan. It is one of the oldest salamanders known.

Karaurus was about 20 centimetres (7.9 in) long, and very similar anatomically to modern salamanders. It probably swam through fresh water feeding on aquatic snails, worms, crustaceans and insects.