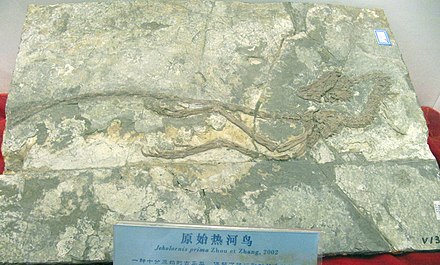 Jeholornis (meaning "Jehol bird") is a genus of avialans that lived between approximately 122 and 120 million years ago during the early Cretaceous Period in China. Fossil Jeholornis were first discovered in the Jiufotang Formation in Hebei Province, China (in what was previously Rehe Province, also known as Jehol--hence the name) and additional specimens have been found in the older Yixian Formation.

Jeholornis had long tails and few small teeth, and were approximately the size of turkeys, making them among the largest avialans known until the Late Cretaceous. Their diet included seeds of cycads, Ginkgo or similar plants.