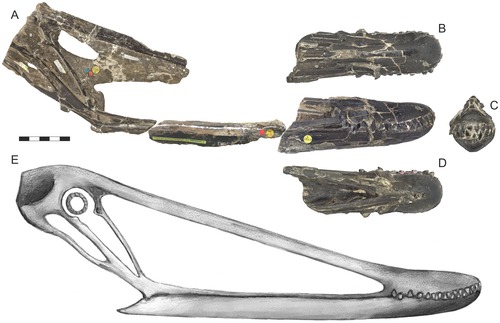 Istiodactylus is a genus of pterosaur that lived during the Early Cretaceous period, about 120 million years ago. The first fossil was discovered on the Isle of Wight in England, and became the holotype specimen of a new species, O. latidens (Latin for "wide tooth"), in the genus Ornithodesmus in 1901. This species was moved to its own genus, Istiodactylus, in 2001; this name is Greek for "sail finger". More specimens were described in 1913, and Istiodactylus was the only pterosaur known from three-dimensionally preserved fossils for much of the 20th century. In 2006, a species from China, I. sinensis, was assigned to Istiodactylus, but it has since been found to belong to a different genus.

Istiodactylus was a large pterosaur; estimates of its wingspan range from 4.3 to 5 metres (14 to 16 ft) long. Its skull was about 45 centimetres (18 in) long, and was relatively short and broad for a pterosaur. The front of the snout was low and blunt, and bore a semicircle of 48 teeth. The triangular teeth were closely spaced, interlocked, and formed a "razor-edged" outline. The lower jaw also had a tooth-like projection that occluded with the teeth. The skull had a very large naso-antorbital opening (which combined the antorbital fenestra and the opening for the bony nostril) and a slender eye socket. Some of the vertebrae were fused into a notarium, to which the shoulder blades connected. It had very large forelimbs, with a wing-membrane distended by a long wing-finger, but the hindlimbs were very short.

Until the 21st century, Istiodactylus was the only known pterosaur of its kind, and was placed in its own family, Istiodactylidae, within the group Ornithocheiroidea. Istiodactylus differed from other istiodactylids by having a proportionally shorter skull. The distinctive teeth of Istiodactylus indicate that it was a scavenger that may have used its teeth to sever morsels from large carcasses in the manner of a cookie cutter. The wings of Istiodactylus may have been adapted for soaring, which would have helped it find carcasses before terrestrial carnivores. Istiodactylus is known from the Wessex Formation and the younger Vectis Formation, which represent river and coastal environments that were shared with various pterosaurs, dinosaurs, and other animals.