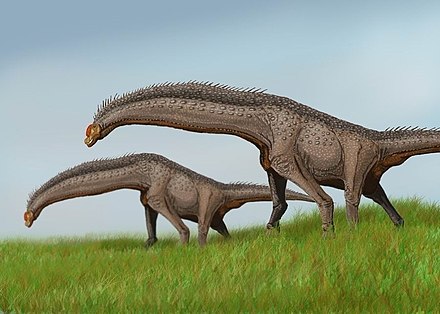 Isisaurus (named after the Indian Statistical Institute) is a genus of dinosaur from the Late Cretaceous Period. Isisaurus was a sauropod (specifically a titanosaur), which lived in what is now India.

The type specimen of Isisaurus colberti, ISI R 335/1-65, was originally described and named as Titanosaurus colberti by Sohan Lal Jain and Saswati Bandyopadhyay in 1997, the specific name honouring Edwin Harris Colbert, but was placed in its own genus, by Wilson and Upchurch, in 2003. It had a short, vertically directed neck and long forelimbs, making it considerably different from other sauropods. The humerus is 148 centimetres long. Based on this specimen, Isisaurus would have grown to about 18 meters (60 feet) in length and weighed about 14,000 kg (15 tons).

Isisaurus is known from much better remains than most titanosaurs. Most of its postcranial skeleton is known. The skeletal material Jain and Bandyopadhyay found between 1984 and 1986 was "in associated and mostly articulated condition;" it included cervical, dorsal, sacral and caudal vertebrae, ribs, pelvis, scapula, coracoid, left forelimb and other bones, though skull, hindlimb and foot bones were missing. The site locality is Dongargaon Hill, which is in a Maastrichtian crevasse splay claystone in the Lameta Formation of India. Dongargaon Hill (20.212318N,79.090709E) near Warora, in Chandrapur District, Maharashtra.

Fungus in coprolites believed to have been voided by Isisaurus indicate that it ate leaves from several species of tree, since these fungi are known to be pathogens which infect tree leaves.