IRRITATOR
(ih-re-tay-tor)
meaning: "In reference to the 'irritation' of the palaeontologists - refer to text for details" 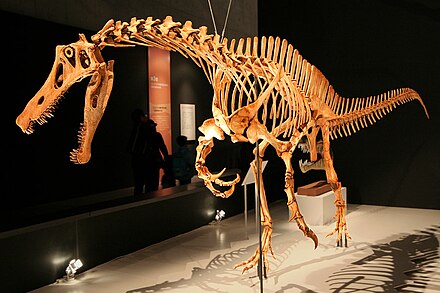 Irritator is a genus of spinosaurid dinosaur that lived in the early Cretaceous Period (Albian stage), around 110 million years ago. Current estimations indicate a length of 8 meters (26 feet). In 2010, Gregory S. Paul gave lower estimations of 7.5 metres and one tonne. It was found in Brazil. Irritator was a theropod with an unusually shaped crest at the rear of its head, and most likely consumed fish.

So far the only fossil that has been found was an 80 centimeter long fossil skull in the Romualdo Member, a layer member of the Santana Formation. This skull strongly resembles the skulls of Suchomimus and Spinosaurus. The genus is often regarded today as identical (synonymous) with Angaturama, which lived in the same time and the same place as Irritator.