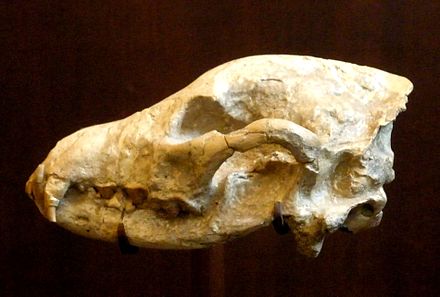 Ictitherium is an extinct genus belonging to the family Hyaenidae and the subfamily Ictitheriinae erected by Trouessart in 1897. Ictitherium species were endemic to Eurasia and Africa during the Middle Miocene through the Early Pliocene (12.7--5.3 mya) and existed approximately 7.4 million years.

Ictitherium were around 1.2 metres (4 ft) long, and looked more like civets than modern hyenas, possessing a long body with short legs. Judging from the teeth, they were insectivores. Ictitherium was a very successful and abundant genus, with multiple fossils often being found at a single site. Possibly, this early hyena genus lived in packs and had a social order, much like its modern descendants.