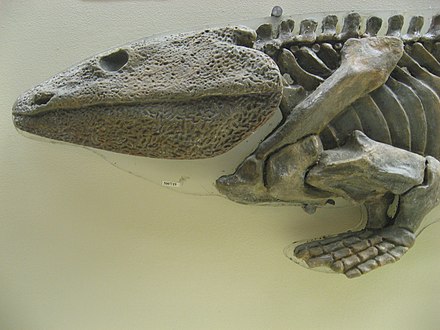 Ichthyostega (Greek: "fish roof") is an early tetrapod genus that lived at the end of the Upper Devonian period. It was a labyrinthodont, one of the first tetrapods in the fossil record. Ichthyostega possessed lungs and limbs that helped it navigate through shallow water in swamps. Though undoubtedly of amphibian build and habit, it is not considered a true member of the group in the narrow sense, as the first true amphibians appeared in the Carboniferous period. Until finds of other early tetrapods and closely related fishes in the late 20th century, Ichthyostega stood alone as the transitional fossil between fish and tetrapods, combining a fishlike tail and gills with an amphibian skull and limbs.