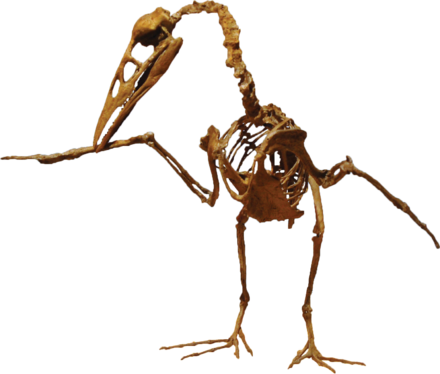 Ichthyornis (meaning "fish bird", after its fish-like vertebrae) was a genus of toothed seabird-like ornithuran from the late Cretaceous period of North America. Its fossil remains are known from the chalks of Alberta, Alabama, Kansas, New Mexico, Saskatchewan, and Texas, in strata that were laid down in the Western Interior Seaway during the Turonian through Campanian ages, about 95-83.5 million years ago. Ichthyornis is a common component of the Niobrara Formation fauna, and numerous specimens have been found.

Ichthyornis has been historically important in shedding light on bird evolution. It was the first known prehistoric bird relative preserved with teeth, and Charles Darwin noted its significance during the early years of the theory of evolution. Ichthyornis remains important today as it is one of the few Mesozoic era ornithurans known from more than a few specimens.