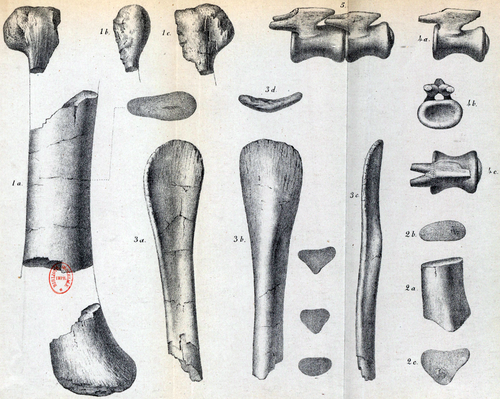 Hypselosaurus (meaning 'highest lizard', from Greek upselos meaning 'high' or 'lofty' and sauros meaning 'lizard') was a titanosaurian sauropod that lived in southern France during the Late Cretaceous, approximately 70 million years ago in the early Maastrichtian. Hypselosaurus was first described in 1846, but was not formally named until 1869, when Phillip Matheron named it under the binomial Hypselosaurus priscus. The holotype specimen includes a partial hindlimb and a pair of caudal vertebrae, and two eggshell fragments were found alongside these bones. Because of the proximity of these eggshells to the fossil remains, many later authors, including Matheron and Paul Gervais, have assigned several eggs from the same region of France all to Hypselosaurus, although the variation and differences between these eggs suggest that they do not all belong to the same taxon. Hypselosaurus has been found in the same formation as the dromaeosaurids Variraptor and Pyroraptor, the ornithopod Rhabdodon, and the ankylosaurian Rhodanosaurus, as well as intermediate bones from other groups.