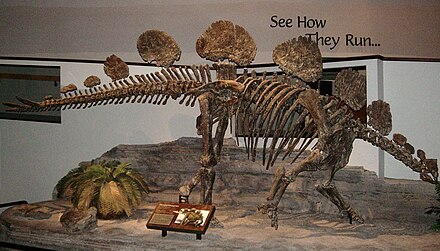 Hesperosaurus (meaning "western lizard", from Classical Greek esperos/hesperos "western" and sauros/sauros "lizard") is a herbivorous stegosaurian dinosaur from the Kimmeridgian epoch of the Jurassic period, approximately 156 million years ago.

Fossils of Hesperosaurus have since 1985 been found in the state of Wyoming and Montana in the United States of America. The type species Hesperosaurus mjosi was named in 2001. It is from an older part of the Morrison Formation, and so a little older than other Morrison stegosaurs. Several relatively complete skeletons of Hesperosaurus are known. One specimen preserves the first known impression of the horn sheath of a stegosaurian back plate.

Hesperosaurus was about six to seven metres long and two to three tonnes heavy. It was a member of the Stegosauridae, quadrupedal plant-eaters protected by vertical bony plates and spikes. It was closely related to Stegosaurus and was similar to it in having two rows of, possibly alternating, plates on its back and four spikes on its tail end. The plates on its back were perhaps not as tall, but were longer. It possibly had a deeper skull than Stegosaurus.