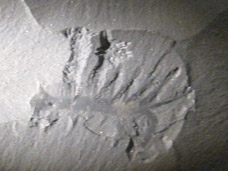 Hallucigenia is a genus of Cambrian xenusiids known from articulated fossils in Burgess Shale-type deposits in Canada and China, and from isolated spines around the world. Its quirky name reflects its unusual appearance and eccentric history of study; when it was erected as a genus, the animal was reconstructed upside down and back to front. Hallucigenia is now recognized as a "lobopodian worm". It is considered by some to represent an early ancestor of the living velvet worms, although other researchers favour a relationship closer to arthropods.