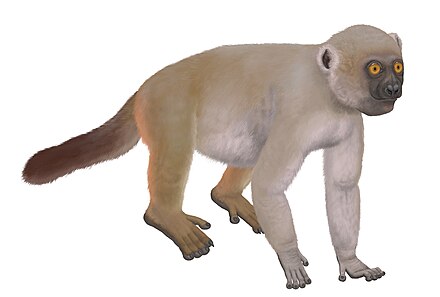 Hadropithecus is a medium-sized, extinct genus of lemur, or strepsirrhine primate, from Madagascar that includes a single species, Hadropithecus stenognathus. Due to its rarity and lack of sufficient skeletal remains, it is one of the least understood of the extinct lemurs. Both it and Archaeolemur are collectively known as "monkey lemurs" or "baboon lemurs" due to body plans and dentition that suggest a terrestrial lifestyle and a diet similar to that of modern baboons. Hadropithecus had extended molars and a short, powerful jaw, suggesting that it was both a grazer and a seed predator.

The monkey lemurs are considered to be most closely related to the living indriids and the recently extinct sloth lemurs, although recent finds had caused some dispute over a possible closer relation to living lemurids. Genetic tests, however, have reaffirmed the previously presumed relationship. Hadropithecus lived in open habitat in the Central Plateau, South, and Southwest regions of Madagascar. It is known only from subfossil or recent remains and is considered to be a modern form of Malagasy lemur. It died out around 444-772 CE, shortly after the arrival of humans on the island.