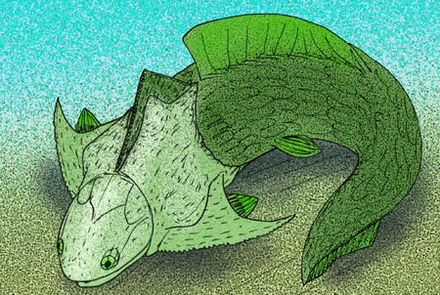 Groenlandaspis ("Greenland Shield") is an extinct genus of arthrodire from the Late Devonian. Fossils of the different species are found late Devonian strata in all continents except eastern Asia. The generic name commemorates the fact that the first specimens of the type species were found in Greenland.

As with all other arthrodires, Groenlandaspis had a joint in the back of its head with its thoracic armor, allowing for its head to be thrown back, increasing its gape. However, as its head is somewhat compressed in comparison with many other arthrodires, and as the dorsal side came to a low, pyramid-like peak, it is believed that Groenlandaspis could not throw its head back very far. It was a relatively small fish, only 7.5 centimetres (3.0 in) in length, and lived on the ocean floor, where it is thought to have fed on either very small prey, or detritus; the small dental plates in its mouth strongly suggest that it was incapable of tackling large prey.