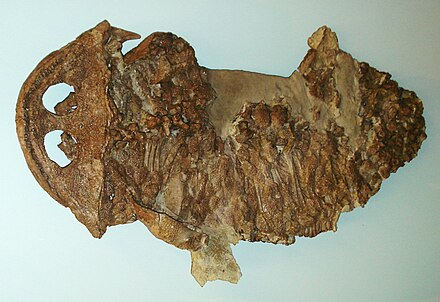 Gerrothorax ("wicker chest") is an extinct genus of temnospondyl amphibian from the Triassic period of Greenland, Germany, Sweden, and possibly Thailand. It is known from a single species, G. pulcherrimus, although several other species such as G. pustuloglomeratus have been named in the past.

Gerrothorax was about 1 metre (3.3 ft) long, and had a remarkably flattened body. It probably hid under sand or mud on river and lake bottoms, scanning for prey with its large, upward-facing eyes. Gerrothorax had an unusually shaped skull with angular protrusions on the sides. This looked vaguely similar to the skull of the earlier, unrelated, amphibian Diplocaulus, but was not so developed.

Fossils have shown that Gerrothorax was pedomorphic, retaining its larval gills as an adult. This is also seen in some modern-day salamanders, such as the mudpuppy, the axolotl, and the olm. Gerrothorax had three pairs of external gills allowing it to breathe under water.

A 2008 study showed that Gerrothorax lifted its head rather than dropping its jaw when catching prey, which has been compared to how a toilet seat opens. In 2011 the skull of Gerrothorax was scanned using microtomography, revealing that the braincase and palatoquadrate regions are highly ossified.

The fossil record of Gerrothorax pulcherrimus extends 35 million years from the Ladinian stage of the Middle Triassic to the Rhaetian stage of the Late Triassic. Throughout this time span, specimens of the species show few morphologic differences, making G. pulcherrimus an extreme example of evolutionary stasis. G. pulcherrimus may have remained unchanged for so long because it could tolerate a wide range of ecological conditions. Although it always needed to live in an aquatic habitat, G. pulcherrimus may have been able to live in a variety of different water bodies with a wide range of salinity.