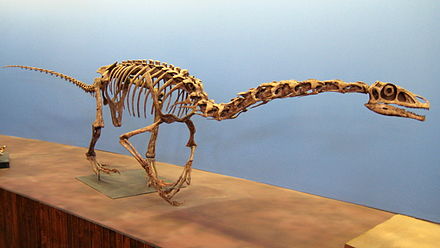 Falcarius is a genus of therizinosaurian dinosaur found in the Cretaceous of east-central Utah, United States. Its name is derived from the word "sickle", falcarius in Latin being a sickle cutter, which scientists have used to describe its large clawed hands.

Falcarius was a 4 metres (13 ft) long, bipedal herbivore. It had a small head and a long neck and tail.

The description of Falcarius (2005), following that of therizinosauroid Beipiaosaurus from the Early Cretaceous of China in 1999, clarifies the early evolution of the Therizinosauria and their relationship with the larger group of theropod dinosaurs, because Falcarius is a transitional form between older theropods and the much changed Therizinosauridae.