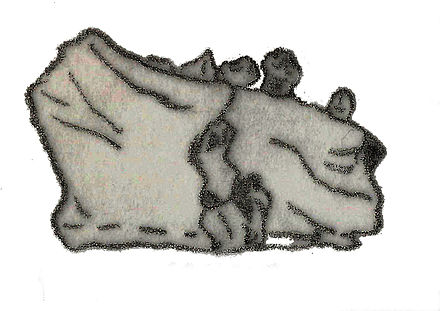 Fabrosaurus ( FAB-ro-SAWR-as; meaning "Fabre's lizard" in honor of Jean Fabre, a French geologist and a colleague of Ginsburg on the expedition that collected the fossil in Basutoland, Southern Africa ; Greek sauros "lizard")) was a genus of herbivorous dinosaur which lived during the Early Jurassic (Hettangian to Sinemurian stages 199 - 189 mya).

Fabrosaurus was named by paleontologist Leonard Ginsburg in 1964 based on partial jawbone with three teeth. The type species, F. australis, was named for the location of the fossils in Lesotho, Southern Africa (australis being Latin for "southern").

Subsequent discoveries included two crushed skulls and disarticulated post-cranial bones (including vertebrae, ribs, and limb bones), allowing for a more complete reconstruction. However, as additional ornithischian fossils were discovered, the features of F. australis were thought to be shared by other species, and by the 1990s and 2000s most authors working with the group found Fabrosaurus to be a nomen dubium (doubtful name), finding the holotype material described by Ginsburg to be insufficient to distinguish a new taxon. Some claim the fossils represent simple variation of Lesothosaurus, which is regarded as valid.