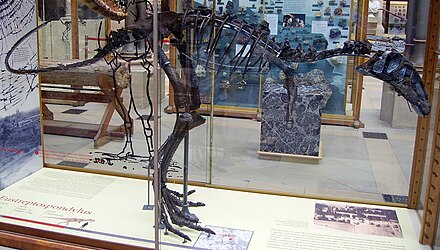 Eustreptospondylus ( ew-STREP-toh-spon-DY-las; meaning "true Streptospondylus") is a genus of megalosaurid dinosaur, from the Callovian stage of the Middle Jurassic period (some time between 165 and 161 million years ago) in southern England, at a time when Europe was a series of scattered islands (due to tectonic movement at the time which raised the sea-bed and flooded the lowland). It might have foraged on shorelines for carcasses and marine life.

The main fossil of Eustreptospondylus was found in 1870. At first it was assigned to other genera. In 1964 it was made a separate genus. Eustreptospondylus was about six metres long as an adult. It was carnivorous, bipedal and had a slightly stiffened tail. It was a typical theropod, with powerful hind limbs, and small forelimbs.