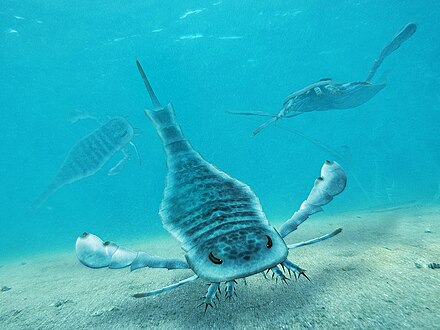 Eurypterus ( ew-RIP-tar-as) is an extinct genus of sea scorpions. They existed during the Silurian Period, from around 432 to 418 million years ago.

There are fifteen species belonging to the genus Eurypterus, the most common of which is Eurypterus remipes, the first eurypterid fossil discovered and the state fossil of New York.

Members of Eurypterus averaged at about 13 to 23 cm (5 to 9 in) in length, but the largest individual discovered was 1.3 m (4.3 ft) long. They all possessed spine-bearing appendages and a large paddle they used for swimming. They were generalist species, equally likely to engage in predation or scavenging.