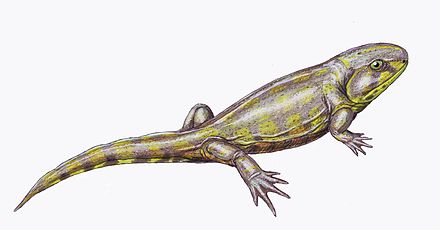 Eucritta melanolimnetes ("the true creature from the black lagoon") is an extinct stem-tetrapod of the extinct genus Eucritta from the Visean epoch in the Carboniferous period of Scotland. Its name is a homage to the 1954 sci-fi/horror movie Creature from the Black Lagoon.

E. melanolimnetes was about 25 centimetres (9.8 in) long, and displayed mixed tetrapod characteristics, such as an amphibian-like skull and a reptilian palate. Its eye sockets were shaped like keyholes, with pointed openings at the front that may have contained a gland of unknown function. This characteristic is also seen in the Loxommatinae subfamily, in which Eucritta has been placed. However, its exact phylogenetic position is not known with much certainty due to its mixture of primitive and derived tetrapod characters. The possession of characters seen in baphetids, anthracosaurs, and temnospondyls suggests that these three groups diverged in the Carboniferous rather than earlier, in the Devonian. Five specimens have been found. Eucritta was described in 1998.