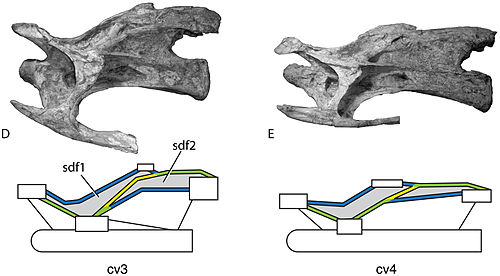 Erketu is the name given to a genus of dinosaur from the Early Cretaceous (Cenomanian - Santonian). It was a sauropod with an extremely long neck. Its fossils were found in Mongolia.

The type species, Erketu ellisoni, was described in March 2006 by Daniel Ksepka and Mark Norell of the American Museum of Natural History. Its neck was estimated to be twice as long as its body, which may be a record for neck to body ratio. The exact ratio is unknown, because no dorsal vertebrae of E. ellisoni have been reported, although some hindlimb material suggests the approximate size of the body. The long neck of Erketu is the result of the individual vertebrae being greatly elongated; it is unknown if the number of cervical vertebrae was increased. Erketu is also diagnosed by bifurcate anterior cervical neural spines, another unusual trait for a titanosauriform. A phylogenetic analysis of sauropods indicates that Erketu is a basal somphospondylian (the clade of all macronarians closer to titanosaurs than to brachiosaurs), and is most closely related to Titanosauria.

This particular sauropod species is named after the American Museum of Natural History's resident paleo-artist, and close friend of Mark Norell, Mick Ellison.