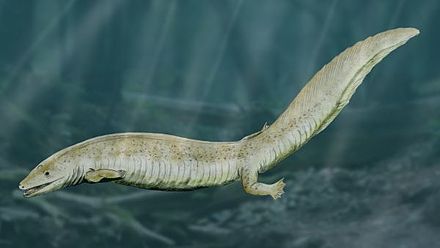 Eogyrinus appears to have been a powerful swimmer that moved quickly through the water by swishing its long tail from side to side. It may have been a predator, lying in wait for prey in much the same way as a modern crocodile. It was a lightly built animal, weighing around 560 kilograms (1,230 lb).

Fossils of Eogyrinus are known from northern England.

Recent studies by Jennifer A. Clack suggest that the amphibian Pholiderpeton described by Thomas Henry Huxley in 1869 is the same animal as Eogyrinus. If this is so, then Pholiderpeton's name takes priority.