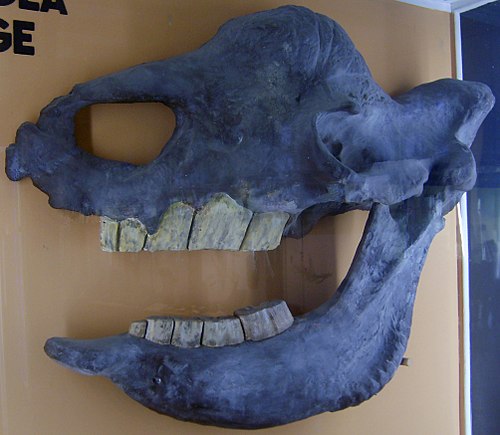 Elasmotherium ("Thin Plate Beast"), also known as the Giant Rhinoceros of Siberia, is an extinct genus of rhinoceros endemic to Eurasia during the Late Pliocene through the Pleistocene, documented from 2.6 Ma to as late as 29,000 years ago in the Late Pleistocene. Three species are recognised. The best known, E. sibiricum, was the size of a mammoth and is thought to have borne a large, thick horn on its forehead. Theories about the function of this horn include defence, attracting mates, driving away competitors, sweeping snow from the grass in winter and digging for water and plant roots. Like all rhinoceroses, elasmotheres were herbivorous. Unlike any others, its high-crowned molars were ever-growing. Its legs were longer than those of other rhinos and were adapted for galloping, giving it a horse-like gait.