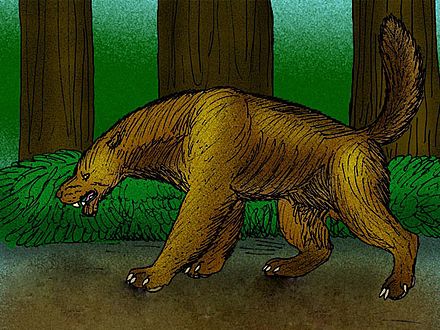 Standing 60 centimeters tall at the shoulders, its build was not similar to that of modern mustelids. Modern-day weasels have short legs and can only achieve short bursts of speed. The legs of Ekorus are built like those of leopards. It appears that before Africa's big cats ruled the savannas, the giant mustelid Ekorus chased down its prey, such as the three-toed horse Eurygnathohippus and the large pig Nyanzachoerus. The reason for this evolution may be related to the Great Rift Valley. Before the rift opened, Kenya was more forested. Eventually as moisture was drawn from the forests by the highlands, the forests opened up into grasslands. The swifter creatures built for open terrain prospered, while the slower forest species perished.

Fossils of large Miocene mustelids have also been discovered in North America and Asia.