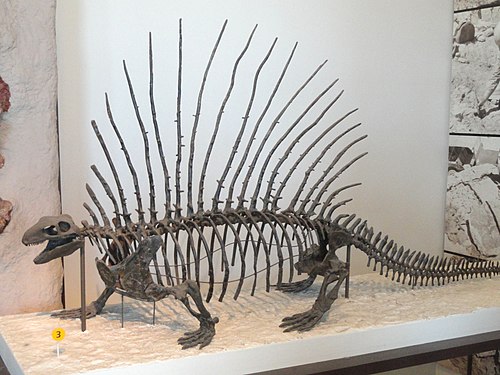 Edaphosaurus (, meaning "pavement lizard" for dense clusters of teeth) is a genus of extinct edaphosaurid synapsid that lived around 300 to 280 million years ago, during the late Carboniferous to early Permian periods. The American paleontologist Edward Drinker Cope first described Edaphosaurus in 1882, naming it for the "dental pavement" on both the upper and lower jaws, from the Greek edaphos/edaphos ("ground"; also "pavement") and sauros/sauros ("lizard").

Edaphosaurus is important as one of the earliest known large plant-eating (herbivorous) amniote tetrapods (four-legged land-living vertebrates). In addition to the large tooth plates in its jaws, the most characteristic feature of Edaphosaurus is a sail on its back. A number of other synapsids from the same time period also have tall dorsal sails, most famously the large apex predator Dimetrodon. However, the sail on Edaphosaurus is different in shape and morphology. The first fossils of Edaphosaurus came from Texas in North America, with later finds in New Mexico, Oklahoma, West Virginia, and Ohio. Fragmentary fossils attributed to Edaphosaurus also have been found in the Czech Republic and in Germany in Central Europe.