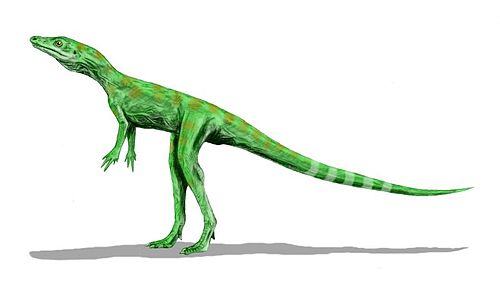 Dromomeron (meaning "running femur") is a genus of lagerpetonid dinosauromorph archosaur that lived around 220 to 211.9 +- 0.7 million years ago. The genus containing species known from Late Triassic-age rocks of the southwestern United States and northwestern Argentina. It is described as most closely related to the earlier Lagerpeton of Argentina, but was found among remains of true dinosaurs like Chindesaurus, indicating that the first dinosaurs did not immediately replace related groups.

Based on the study of the overlapping material of Dromomeron and Tawa hallae, Christopher Bennett proposed that the two taxa were conspecific, forming a single growth series of Dromomeron.