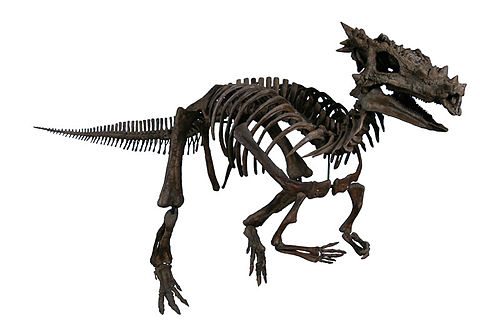 Dracorex is a dinosaur genus of the family Pachycephalosauridae, from the Late Cretaceous of North America. The type (and only known) species is Dracorex hogwartsia, meaning "dragon king of Hogwarts". It is known from one nearly complete skull (the holotype TCMI 2004.17.1), as well as four cervical vertebrae: the atlas, third, eighth and ninth. These were discovered in the Hell Creek Formation in South Dakota by three amateur paleontologists from Sioux City, Iowa. The skull was subsequently donated to the Children's Museum of Indianapolis for study in 2004, and was formally described by Bob Bakker and Robert Sullivan in 2006. However, Jack Horner et al. suspect that it is a juvenile Pachycephalosaurus and an analysis of pachycephalosaur fossils by a joint team from the University of California, Berkeley and the Museum of the Rockies has questioned the validity of two named genera of pachycephalosaur, Dracorex and Stygimoloch. According to the team, specimens of Dracorex and Stygimoloch might actually represent earlier growth stages of Pachycephalosaurus. As this article on the UC Berkeley website says, "The confusion is traced to their bizarre head ornaments, ranging from shields and domes to horns and spikes, which changed dramatically with age and sexual maturity, making the heads of youngsters look very different from those of adults."