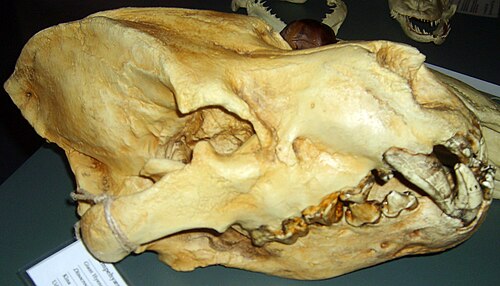 Dinocrocuta is an extinct genus of hyena-like feliform carnivores. It lived in Asia, and Africa, during the Miocene epoch. It had very strong jaws that were able to crush bones.

Its estimated weight was roughly 380 kg.

Dinocrocuta was an exceptionally powerful predator and scavenger, capable of preying on animals much larger than itself. Though it is currently unknown if Dinocrocuta was solitary or social, it was probably an able hunter of such animals as the tusked rhinoceros Chilotherium. Chilotherium, despite its great size, was vulnerable to the giant feliform, particularly when it was giving birth, or was injured or sick. A skull and jaw from a female Chilotherium bears the distinctive bite marks on the forehead from a Dinocrocuta's teeth, indicating that the rhino was part of the carnivore's diet. The regrowth of bone on the rhino's injuries also indicate that the Dinocrocuta's attempt at predation failed, and that the rhinoceros fought off its attacker, managing to escape and heal.