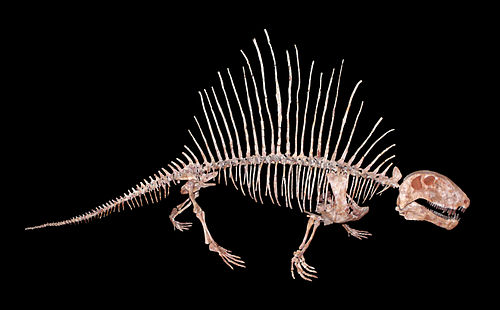 Dimetrodon (meaning "two measures of teeth") is an extinct genus of synapsid that lived during the Cisuralian (Early) Permian, around 295-272 million years ago (Ma). It is a member of the family Sphenacodontidae. The most prominent feature of Dimetrodon is the large neural spine sail on its back formed by elongated spines extending from the vertebrae. It walked on four legs and had a tall, curved skull with large teeth of different sizes set along the jaws. Most fossils have been found in the southwestern United States, the majority coming from a geological deposit called the Red Beds of Texas and Oklahoma. More recently, fossils have been found in Germany. Over a dozen species have been named since the genus was first described in 1878.

Dimetrodon is often mistaken for a dinosaur or as a contemporary of dinosaurs in popular culture, but it became extinct some 40 million years before the first appearance of dinosaurs. Reptile-like in appearance and physiology, Dimetrodon is nevertheless more closely related to mammals than to modern reptiles, though it is not a direct ancestor of mammals. Dimetrodon is assigned to the "stem-mammals" or "non-mammalian synapsids", a group traditionally called "mammal-like reptiles". This groups Dimetrodon together with mammals in a clade (evolutionary group) called Synapsida, while placing dinosaurs, reptiles and birds in a separate clade, Sauropsida. Single openings in the skull behind each eye, known as temporal fenestrae, and other skull features distinguish Dimetrodon and mammals from most of the earliest sauropsids.

Dimetrodon was probably one of the apex predators of the Cisuralian ecosystems, feeding on fish and tetrapods, including reptiles and amphibians. Smaller Dimetrodon species may have had different ecological roles. The sail of Dimetrodon may have been used to stabilize its spine or to heat and cool its body as a form of thermoregulation. Some recent studies argue that the sail would have been ineffective at removing heat from the body, and was most likely used in courtship display.