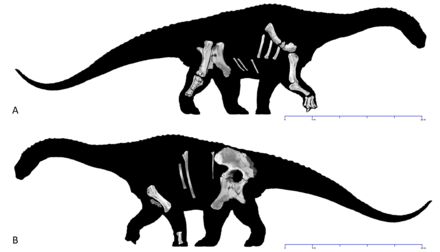 Diamantinasaurus is a extinct genus of lithostrotian titanosaurian sauropod from Australia that lived during the early Late Cretaceous, about 94 million years ago. The type species of the genus is D. matildae, first described and named in 2009 by Scott Hocknull and colleagues. Meaning "Diamantina reptile", the name is derived from the location of the nearby Diamantina River and the Greek word sauros, "reptile". The specific epithet is from the Australian song Waltzing Matilda, also the locality of the holotype and paratype. The known skeleton includes most of the forelimb, shoulder girdle, pelvis, hindlimb and ribs of the holotype, and one shoulder bone, a radius and some vertebrae of the paratype.