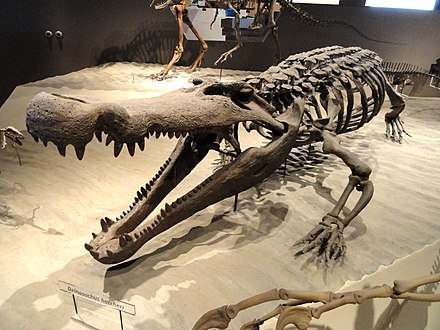 Deinosuchus ( DY-na-SEW-kas) is an extinct genus related to the alligator that lived 82 to 73 million years ago (Ma), during the late Cretaceous period. The name translates as "terrible crocodile" and is derived from the Greek deinos (deinos), "terrible", and soukhos (soukhos), "crocodile". The first remains were discovered in North Carolina (United States) in the 1850s; the genus was named and described in 1909. Additional fragments were discovered in the 1940s and were later incorporated into an influential, though inaccurate, skull reconstruction at the American Museum of Natural History. Knowledge of Deinosuchus remains incomplete, but better cranial material found in recent years has expanded scientific understanding of this massive predator.

Although Deinosuchus was far larger than any modern crocodile or alligator, with the largest adults measuring 10.6 m (35 ft) in total length, its overall appearance was fairly similar to its smaller relatives. It had large, robust teeth built for crushing, and its back was covered with thick hemispherical osteoderms. One study indicated Deinosuchus may have lived for up to 50 years, growing at a rate similar to that of modern crocodilians, but maintaining this growth over a much longer time.

Deinosuchus fossils have been described from 10 US states, including Texas, Montana, and many along the East Coast. Fossils have also been found in northern Mexico. It lived on both sides of the Western Interior Seaway, and was an opportunistic apex predator in the coastal regions of eastern North America. Deinosuchus reached its largest size in its western habitat, but the eastern populations were far more abundant. Opinion remains divided as to whether these two populations represent separate species. Deinosuchus was probably capable of killing and eating large dinosaurs. It may have also fed upon sea turtles, fish, and other aquatic and terrestrial prey.