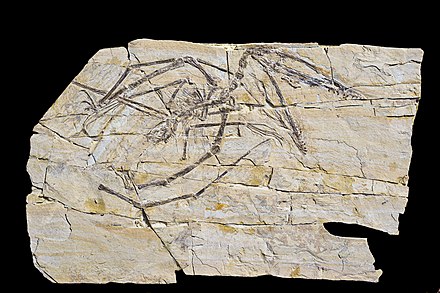 Darwinopterus (meaning "Darwin's wing") is a genus of pterosaur, discovered in China and named after biologist Charles Darwin. Between 30 and 40 fossil specimens have been identified, all collected from the Tiaojishan Formation, which dates to the middle Jurassic period, 160.89-160.25 Ma ago. The type species, D. modularis, was described in February 2010. D. modularis was the first known pterosaur to display features of both long-tailed ('rhamphorhynchoid') and short-tailed (pterodactyloid) pterosaurs, and was described as a transitional fossil between the two groups. Two additional species, D. linglongtaensis and D. robustodens, were described from the same fossil beds in December 2010 and June 2011, respectively.