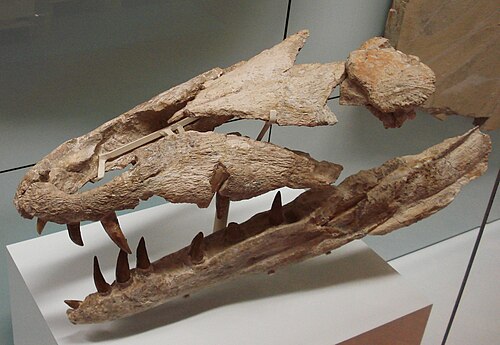 Dakosaurus is an extinct genus within the family Metriorhynchidae that lived during the Late Jurassic and Early Cretaceous. It was large, with teeth that were serrated and compressed lateromedially (flattened from side to side). The genus was established by Friedrich August von Quenstedt in 1856 for an isolated tooth named Geosaurus maximus by Plieninger. Dakosaurus was a carnivore that spent much, if not all, its life out at sea. The extent of its adaptation to a marine lifestyle means that it is most likely that it mated at sea, but since no eggs or nests have been discovered that have been referred to Dakosaurus, whether it gave birth to live young at sea like dolphins and ichthyosaurs or came ashore like turtles is not known. The name Dakosaurus means "biter lizard", and is derived from the Greek dakos ("biter") and sauros -sauros ("lizard").